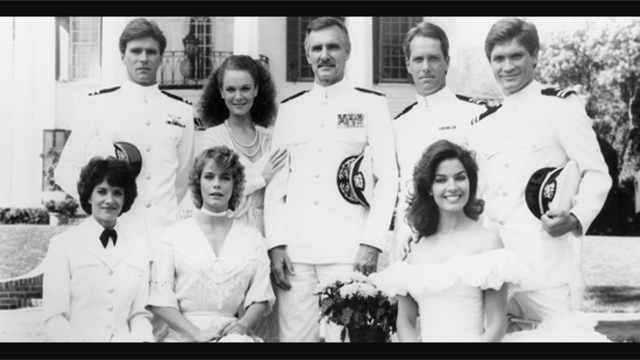 The other day I found the first episode of NAS Emerald Point on YouTube. Having lived on two Navy bases growing up, I was excited by this show (CBS 1983-84 season). I’d never seen the life of military dependents portrayed on TV. Often, one hears about the sacrifices military families make to support the careers of their fathers and husbands.  The show touched on this to some extent, but also featured a Navy Daughter following in her Father’s footsteps by graduating from the US Naval Academy and being accepted into flight school. It made me think about the opportunities that were presented to me as a Navy Daughter. I didn’t go into the service, but my Father’s service gave me the chance to live, work and study in many places. It also exposed me to Supply Chain, which I spent the first 20 years of my career performing. The TV show featured another real life Navy Daughter, my class-mate actress Stephanie Dunnam. We first met when we were 13 and I felt a geeky pride to see her in this show. She didn’t follow in her Father’s footsteps, but one of her Father’s tours of duty gave her life changing experiences. END_OF_DOCUMENT_TOKEN_TO_BE_REPLACED

My friend Judy Mackey told me about the red string of fate.  I was not familiar with the Asian legend of gods tying an invisible red string around those that are soul mates destined to be married.  Judy had written a short story about this, and it came up when I told her I wanted to start writing about traditions.  As a military dependent with no roots, I felt like my life was lacking in traditions.  I started to wonder how people with similar circumstances created traditions for themselves. I decided to start with Judy since we are similarly situated; middle-aged, no children/grand-children, grew up as a military dependent, etc. END_OF_DOCUMENT_TOKEN_TO_BE_REPLACED